I’m going to start this post off with a small disclaimer: I’m a born and raised Calgarian and I love to tease our northerly neighbour Edmonton for its lack of activities, weird roads, and inferior hockey team. While the latter 2 might still be true, Edmonton, like Calgary, is no longer the place it once was a decade ago. In fact, friends from Calgary that have lived in Edmonton recently for school or work describe it as ‘actually not that bad‘.

I was skeptical at first, but hey, maybe we’re like those siblings that fight all the time and then eventually grow up, do our own thing, and warm up to each other. I mean, we both have the same Albertan blood running through our veins, so we can’t be that different. After all, Edmonton today is culturally diverse, sports a great food scene, and is nicknamed Canada’s Festival City. And if Duchess, arguably one of the best patisseries in Canada can set up shop in Edmonton and grow to what it is today, then I have no choice but to give this city another chance. That chance just happened to come in the form of judging at a BBQ competition. Awww yeah!

Seeing as I was headed up with some other BBQ judging friends on Saturday morning, and then returning Sunday afternoon, we were faced with a HUGE dilemma:

If you had only one meal in Edmonton, where would you go?

After blitzing through a bunch of posts on Let’s Om Nom, an Edmonton Food Blog run by Cindy N. (who by the way, really knows her stuff!), I came across a restaurant that suited what I was looking for. Because we were judging the Chef’s Challenge event in the afternoon and then the main meats the next day at Porkapalooza, I figured dinner should be more casual and light, but still interesting. Delicious of course, goes without saying.

So when I came across Cindy’s review of Tao Garden, a Chinese restaurant with a ‘Create your own Noodle Soup’ menu, I knew this was going to be the answer to that ever important life question of the weekend. Now I know that there’s definitely way more than one restaurant that could’ve fit what we were looking for, but it seemed like we couldn’t go wrong with Tao Garden, and Cindy’s enthusiasm for the place easily solidified that.

From the outside, Tao Garden is unassuming and doesn’t look like much. From the inside? Well, it still doesn’t look like much; this place epitomizes the hole in the wall Chinese restaurant, but it’s a decently sized hole. The interior is simple and quaint in the way that you would imagine it to be, giving it that Asian-family run charm. It was around 8pm when we got there on a Saturday night, and we had no troubles getting a table as it was only about a quarter or a third full.

Now, onto this noodle soup building business because it’s not going to build itself! For $10.50, you shall:

That’s over 68,000 combinations for your noodle soup if you’re just sticking with two toppings! 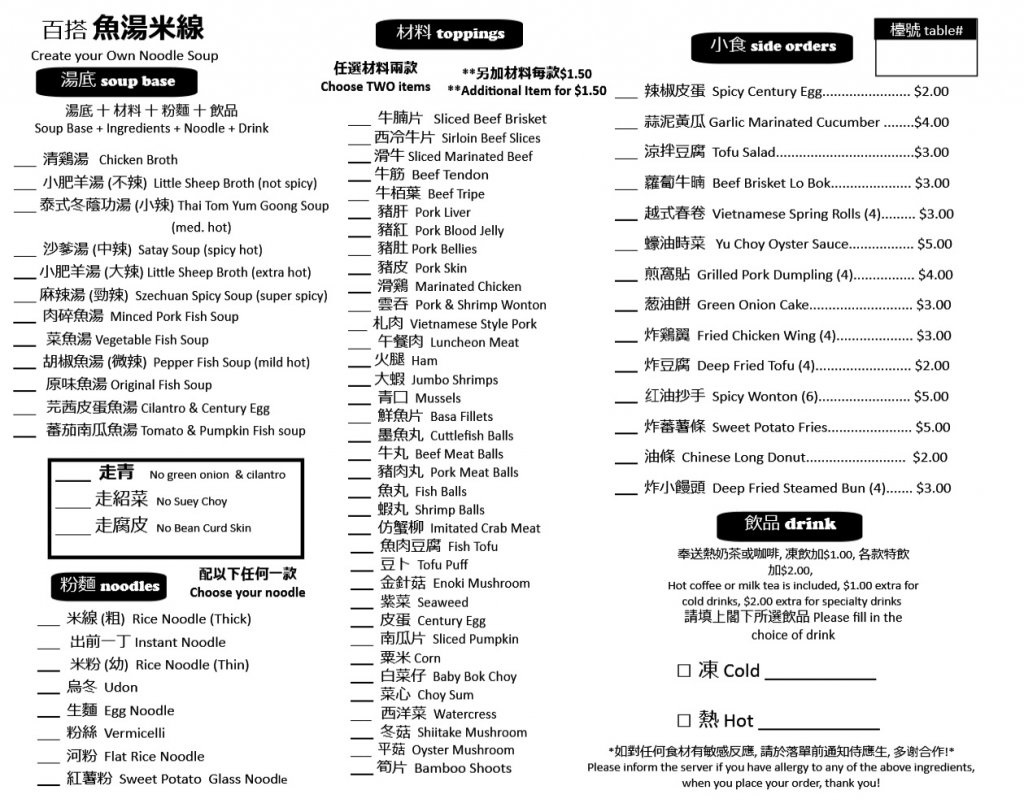 This was legitimately one of those times where too many options became a bad thing, but only because we couldn’t try out our next concoction until the next time we visit Edmonton. Our noodle soups took a while to come out, so luckily we weren’t in a super big rush although we did have plans later in the night to check out the Maestro show at Improvaganza, which turned out to be very entertaining.

Each noodle soup comes with green onion, cilantro, suey choy, and bean curd skin by default unless you check off the option on your ordering sheet to deny them the right to enter your bowl. From reading some other reviews, it appears that this used to also come with mushrooms, but this was no longer the case when we went. I guess I can’t complain, since $10.50 is still great value for what you’re getting.

I was most curious about the little sheep broth, and decided to go with the non spicy version and egg noodles. The toppings were the hardest part for me because there were so many possibilities, but I ended up settling for Sliced Beef Brisket, Shrimp Balls, and Tofu Puff, a combination which I thoroughly enjoyed. The little sheep broth was very savoury, while the brisket had a good amount of fat that made it smooth and succulent. Everything was just so perfect and satisfying; the portions were also very generous!

Here are the combinations that my friends cooked up:

Unfortunately, while my friends thought the meal was good overall, they did not enjoy their bowls as much as I did for one reason or another. For example, the flat rice noodles were stuck together and you had to peel them apart, or perhaps the broth wasn’t quite what they imagined it to be, so the combination didn’t work as nicely. I looked at other blog posts about this restaurant once I got back to Calgary to start this review, and it appears as though the Little Sheep Broth is a fan favourite amongst those that have tried multiple soup bases.

I really don’t have much left to say about Tao Garden, other than I’m jealous. I’m jealous that we don’t have something like this in Calgary.. so I guess that makes me jealous of Edmonton. Damn. But Edmonton, I’ll be back for you in late July to judge at the Canadian Food Championships and I’m looking forward to more good eats. And you know what? My friends were right. You’re actually not that bad.

This error message is only visible to WordPress admins